We are all citizens of qatáy 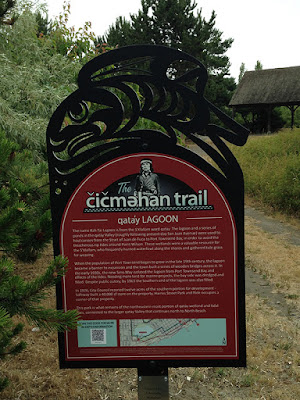 The name ‘Kah Tai’ has been a subject of debate in terms of authenticity, origin and even spelling and pronunciation. It is in reality a phonetic representation of the S’Klallam name for where we live. The S’Klallam language was not rendered into a written alphabet until 1992. That alphabet spells the name ‘qatáy’ and is pronounced as most of us already do. The first syllable does not have a long 'i' vowel sound, but an 'ah' sound, with the accent on the second syllable, which does have a long 'i' sound. It does not sound like 'mai tai'.

We are all citizens of qatáy. Our lagoon and park are the southern expression of qatáy Valley, altered with dredge spoils in the 1960s but with the intervention of time and nature and more than a little help from friends, a nature park, protected in perpetuity by the grant that provided for the park’s creation.

The Chetzemoka (čičməhán) Trail is a joint endeavor of the Jamestown S'Klallam Tribe and the Native Connections Action Group, Quimper Unitarian Universalist Fellowship. The historic sites selected by the Tribe are connected by a trail to increase the visibility of the S'Klallam history in qatáy (Port Townsend), their traditional territory. More information can be found on the Jamestown S’Klallam website: http://www.tribalmuseum.jamestowntribe.org/hsg/exhibits/chetzemokatrail/ct_menu.php.
Posted by kahtaifriend at 9:39 AM No comments:

Great Blue Herons have long been a favorite bird to watch at Kah Tai, and when the resident few hunted along the perimeter during nesting season, they flapped away to some undefined roost. This year has been different, profoundly so. We had an inkling when we watched six adults fly in near-formation across the lagoon this spring.

And then the nesting reports started. The birds themselves announce the location of their rookery, as do the occupants of satellite nests. There are at least four nests spotted thus far. One of the easiest to observe has nurtured four nestlings, awkward pterodactyls that they are when they cannot fly. But the four are almost ready, flapping and stretching their fully feathered wings to go hunting with their parents.

Their parents will be so relieved. As the youngsters have grown, the parents have diminished. Imagine catching enough prey to feed four beaks this size. The adults are thin and worn, as parents everywhere will understand.

The human neighbors have been tolerant, given that a nest of young herons can sound a lot like a murder going on somewhere nearby when they get to talking in their youngster voices. Great Blue Herons are a priority species in our state, and their rookeries are protected.

Thanks to Bev McNeil and David Gluckman for sharing their photographs.
Posted by kahtaifriend at 5:43 PM No comments:

The monthly workparty at Kah Tai focused on invasives. The particular invasives being wrestled were tiny hollies and spurge laurels in the woodland, found in abundance at the bases of trees, byproducts of bird digestion of the fruits of hollies and spurge laurel. The best way to pull a tough two inch plant with a five inch root is sitting on a garden stool with a pair of needlenose pliers.

While concentrating on the seedlings, it suddenly seemed I wasn't the only presence in the woodland. Sitting on my stool, I looked west and a few yards away was a head atop the flexing neck of a Canada Goose. Our eyes were at about the same height but the big bird didn't see me. He or she moved slowly toward the lagoon edge and another goose head came in to view a few feet behind. And there between the two adults, a flock of little goslings scurried along. Their parents were marching them from their nesting site to the water with cautious deliberation.

The lead goose reached the trail that runs along the southern edge of the lagoon and the procession paused while both directions on the trail were studied for danger, for people on foot or bicycle, for dogs. The lead goose determined that the trail was safe, and the family hurried across the trail and into the lagoon.

Shortly after they launched, a human family passed by on the trail, two small girls in tow.

'Mommy, look!' The goose family at the edge of the lagoon were admired by the human family.

A minute or two later, a group of four human teenagers passed in the other direction.

The level of enthusiasm from the little kids was expected, but who knew teenagers would think goslings were cool?

And then, back to the needlenose and pulling minute invasive seedlings. Among the invasives, much good news. Seedlings of serviceberry, snowberry, thimbleberry, osoberry, taking a stand, all planted by birds as indiscriminately as the invasives were. But as the native berry sources mature, the birds will be less likely to feed on holly and spurge and more likely to continue the cycle with native species. More native understory, fewer invasives.

In the open areas of the southern park, the tall mahonia has burst into dominance, suddenly competing successfully with invasive blackberry, with bright yellow blossom heads peering through blackberry canes. The nootka rose has been pushing back against the blackberry for several years and it now has another native comrade in arms. We might, actually, be winning this particular battle for Kah Tai.
Posted by kahtaifriend at 11:33 PM No comments:

Kah Tai has its share of challenges, most arising from human misbehavior. Of course, Kah Tai exists because of human misbehavior - the blocking of a tidally flushed estuary with 231,000 cubic yards of sandy dredge spoil wasn't an accident. And yet those spoils have managed, with time and succession and a little help, to develop a healthy ecosystem that has hosted 152 species of birds at last count.

Occasionally humans can be found camping in the woodland, especially problematic during the dry summer months. But here at the beginning of September, the park received the gift of an early autumn rain, and the occasional smoker in the trees is less likely to burn the whole place down. The birds can flee now as the fledglings are all flight-worthy in September, but in the early summer, the young are always most at risk.

Trees can't flee. They endure or die and when we are fortunate, they thrive. Madrone, maple, willow, poplar, bitter cherry, all maturing in the park. The native madrone is mostly faring well at Kah Tai. The samsaras of vine maple declare another successful year. Willows of indeterminate species cluster along the banks and the stately but non-native poplars line the park's southern boundary and still populate the lagoon edge. Who knew that willows intermingled so readily that even the botanical experts have a time of it trying to sort out their species?

No problem figuring out native bitter cherry, though. The bark is distinctive and the bitter fruit is popular with the feathered crowd. 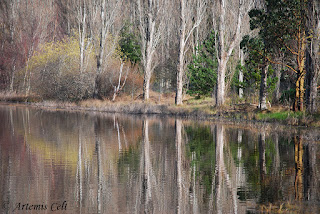 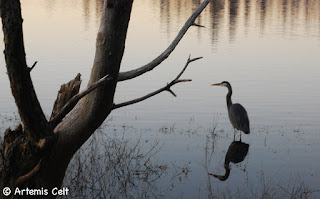 There are never enough volunteers, and volunteers get less respect than they should for their heroic efforts here. Volunteers spend more time picking up trash than pulling invasives. When homeless encampments are abandoned, all the detritus remains, and little is done about that detritus except what is done by volunteers. 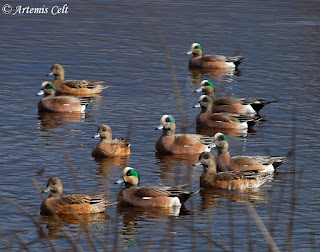 Still, the park is resilient and nature moves gracefully foward into another season. The Ruddy Duck males are sporting their brightest of blue bills. Male Wigeons display iridescent green face patches. A Merlin flies along the trail. Common Redpolls, not at all common here and a first sighting in the park, are spotted in the alders along the trail, busily raiding the seed cones. If only the humans would be as appreciative and respectful of the park as the birds are.

Posted by kahtaifriend at 11:34 PM No comments:

the colors of late autumn

Kah Tai is settling in for the winter, and berries seem to be everywhere. Although none of those pictured here are native species, all provide some food value for wildlife. We continue to plant natives but many are too immature to fruit. Look for blue elderberry and evergreen huckleberry to produce in the not too distant future.

Above are two non-native hawthorns and a privet. That Washington hawthorn is named after the 'other' Washington, first noted in cultivation in the 1700s in the Washington DC area.

The work continues to minimize the spread of invasive English holly and English ivy in the park. Both species are so successful that they crowd out the native understory. Both produce berries of interest to birds and so proliferate beneath the trees where birds perch. Funny how passage through a bird's gut can determine the location of the next generation of invasives.
Posted by kahtaifriend at 9:21 AM No comments:

fire at a distance


A winter just a couple of degrees Fahrenheit too warm led to torrential winter rains that should have been snow in our part of the Olympic Mountain watershed. Three percent of normal snowpack in our watershed when spring arrived resulted in water rationing - voluntary so far, but possible to be enforced.

Our water supply is surface water, taken from the Big and Little Quilcene Rivers through a complex calculation, with one simple rule: if the flow is lower than 27 cubic feet per second, we cannot withdraw water.

The Olympic National Forest is in significant part temperate rain forest, in the westside valleys of the Quinault, Queets, Hoh and Bogachiel Rivers. You don't get fires in a rainforest. But this year, you do. Relatively containable fires are burning in the Olympics.

East of the Cascades, hell has broken loose. Another year of drought and the tinder is ready. The beautiful landscape is being transformed in unimaginable ways.

If there's an upside to fires, it's the sunsets for those just distant enough not to suffer the particulates. Enjoying such sunsets feels guilty, because they mean someone is suffering, even if the fire is in a remote area. Wildlife always suffers. We forget that when humans are not present, life still goes on for other species. Human suffering always takes precedence, and it isn't at all certain that it should. There is so much more to this world than us.

Nonetheless, beautiful sunsets. Top left is smoke from the fires in the Olympics around 3 August. Next photo down is those mudflats we hadn't seen in quite some time, reflecting that fiery sunset. And bottom photo is a sunset in mid-August, courtesy of Eastern Washington's calamity.

The drought has also been good for the appearance of shorebirds at Kah Tai. The two summers that were part of Admiralty Audubon's Kah Tai Bird Survey (2010 and 2011) were both unusually wet, and few shore birds were reported because there were no mudflats. This year has hit the shore bird bonus board, while elsewhere, others pay the price.

Admiralty Audubon's November 17, 2011 program was a Kah Tai status update. Thirty-some people attended to hear about the RCO recommendation, the NPS ruling that includes all 78.5 acres of Kah Tai in the 6(f) boundary, and the Port's lawsuit against the City, RCO and NPS in an attempt to overturn that ruling.

Admiralty Audubon featured a presentation by Rick Jahnke on 17 February 2011, which included a history of the Park's creation and current attempts to develop the uplands. We estimated 40-50 attendees.

The Sierra Club of the North Olympic Peninsula presented a talk on the history of Kah Tai at their first Port Townsend general gathering, 22 January 2011. Rick Jahnke included a history of the Park's creation and current attempts to develop the uplands. We counted about 40 attendees in a standing-room-only crowd at the Community Center.

A roomful of Port Townsend citizens (we counted 65) attended a presentation on 25 August 2010. The warm-up music included two great protest songs written especially for fundraising to save Kah Tai in the late 1970s. Several visual displays highlighted the history of the struggle to protect Kah Tai from development incursions.